Authors: Vitaliy Radchenko, and Yury Kashnitsky. Translated and edited by Christina Butsko, Egor Polusmak, Anastasia Manokhina, Anna Shirshova, and Yuanyuan Pao. This material is subject to the terms and conditions of the Creative Commons CC BY-NC-SA 4.0 license. Free use is permitted for any non-commercial purpose.

In previous articles, you explored different classification algorithms as well as techniques that can be used to properly validate and evaluate the quality of your models.

Now, suppose that you have chosen the best possible model for a particular problem and are struggling to further improve its accuracy. In this case, you would need to apply some more advanced machine learning techniques that are collectively referred to as ensembles.

An ensemble is a set of elements that collectively contribute to a whole. A familiar example is a musical ensemble, which blends the sounds of several musical instruments to create harmony, or architectural ensembles, which are a set of buildings designed as a unit. In ensembles, the (whole) harmonious outcome is more important than the performance of any individual part.

Let’s write an analytic expression for this theorem:

Let’s look at another example of ensembles: an observation known as Wisdom of the crowd.

In 1906, Francis Galton visited a country fair in Plymouth where he saw a contest being held for farmers. 800 participants tried to estimate the weight of a slaughtered bull. The real weight of the bull was 1198 pounds. Although none of the farmers could guess the exact weight of the animal, the average of their predictions was 1197 pounds.

A similar idea for error reduction was adopted in the field of Machine Learning.

Bagging (also known as Bootstrap aggregation) is one of the first and most basic ensemble techniques. It was proposed by Leo Breiman in 1994. Bagging is based on the statistical method of bootstrapping, which makes the evaluation of many statistics of complex models feasible.

Let’s say we are drawing balls from a bag one at a time. At each step, the selected ball is put back into the bag so that the next selection is made equiprobably i.e. from the same number of balls \(\large N\). Note that, because we put the balls back, there may be duplicates in the new sample. Let’s call this new sample \(\large X_1\).

By repeating this procedure \(\large M\) times, we create \(\large M\) bootstrap samples \(\large X_1, \dots, X_M\). In the end, we have a sufficient number of samples and can compute various statistics of the original distribution. 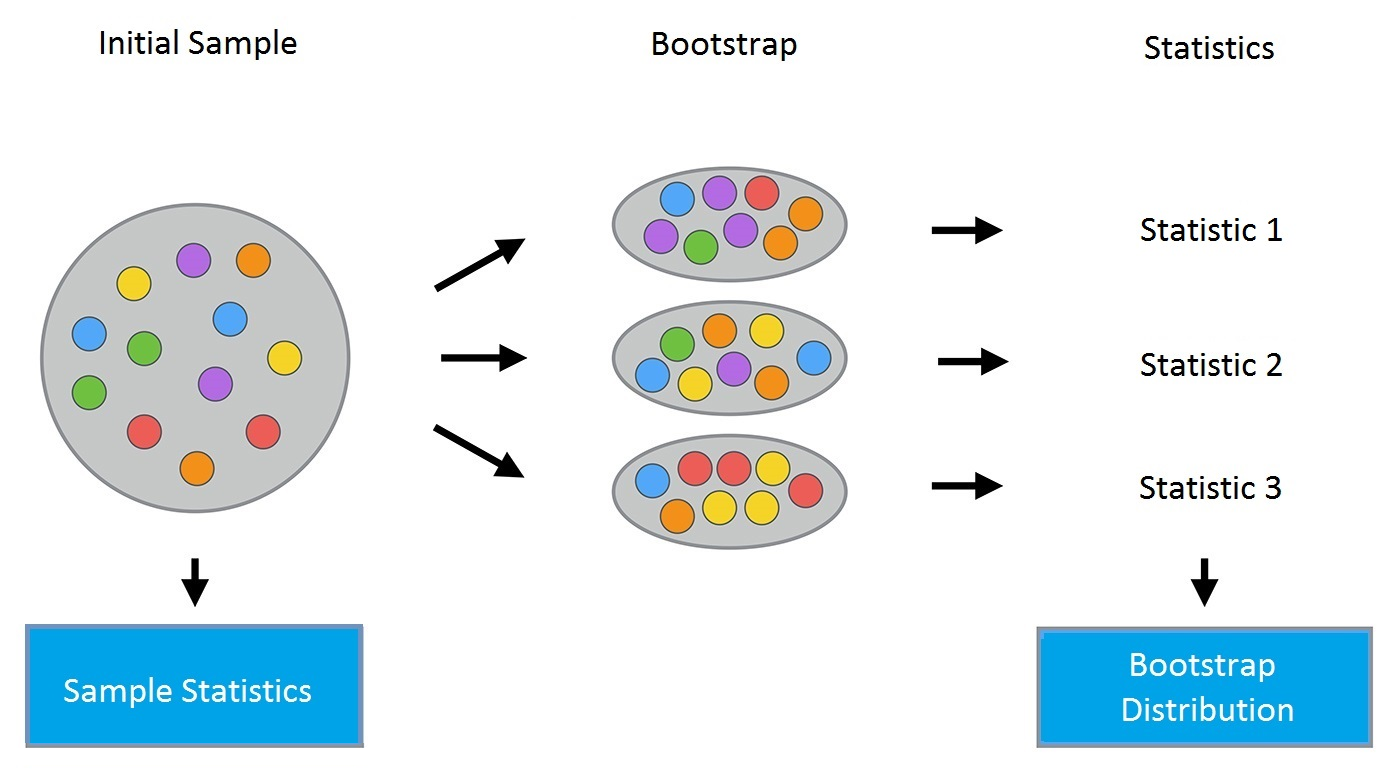 For our example, we’ll use the familiar telecom_churn dataset. Previously, when we discussed feature importance, we saw that one of the most important features in this dataset is the number of calls to customer service. Let’s visualize the data and look at the distribution of this feature. Looks like loyal customers make fewer calls to customer service than those who eventually leave. Now, it might be a good idea to estimate the average number of customer service calls in each group. Since our dataset is small, we would not get a good estimate by simply calculating the mean of the original sample. We will be better off applying the bootstrap method. Let’s generate 1000 new bootstrap samples from our original population and produce an interval estimate of the mean.

For the interpretation of confidence intervals, you can address this concise note or any course on statistics. It’s not correct to say that a confidence interval contains 95% of values. Note that the interval for the loyal customers is narrower, which is reasonable since they make fewer calls (0, 1 or 2) in comparison with the churned clients who call until they are fed up and decide to switch providers.

Now that you’ve grasped the idea of bootstrapping, we can move on to bagging.

Suppose that we have a training set \(\large X\). Using bootstrapping, we generate samples \(\large X_1, \dots, X_M\). Now, for each bootstrap sample, we train its own classifier \(\large a_i(x)\). The final classifier will average the outputs from all these individual classifiers. In the case of classification, this technique corresponds to voting: $\(\large a(x) = \frac{1}{M}\sum_{i = 1}^M a_i(x).\)$

The picture below illustrates this algorithm: 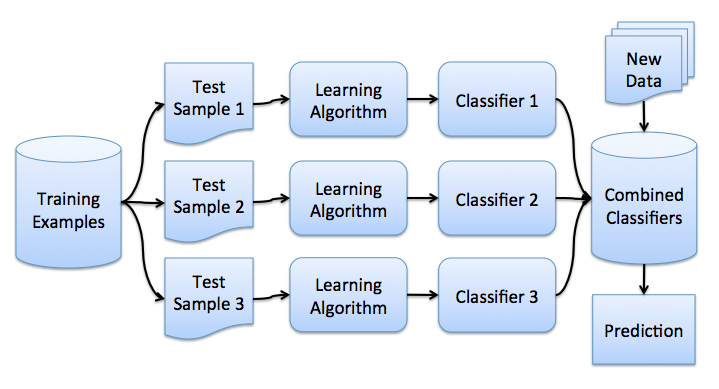 Let’s consider a regression problem with base algorithms \(\large b_1(x), \dots , b_n(x)\). Assume that there exists an ideal target function of true answers \(\large y(x)\) defined for all inputs and that the distribution \(\large p(x)\) is defined. We can then express the error for each regression function as follows:

And the expected value of the mean squared error:

We’ll assume that the errors are unbiased and uncorrelated, that is:

Now, let’s construct a new regression function that will average the values from the individual functions:

Thus, by averaging the individual answers, we reduced the mean squared error by a factor of \(\large n\).

From our previous lesson, let’s recall the components that make up the total out-of-sample error:

Bagging reduces the variance of a classifier by decreasing the difference in error when we train the model on different datasets. In other words, bagging prevents overfitting. The efficiency of bagging comes from the fact that the individual models are quite different due to the different training data and their errors cancel each other out during voting. Additionally, outliers are likely omitted in some of the training bootstrap samples.

The scikit-learn library supports bagging with meta-estimators BaggingRegressor and BaggingClassifier. You can use most of the algorithms as a base.

Let’s examine how bagging works in practice and compare it with a decision tree. For this, we will use an example from sklearn’s documentation. 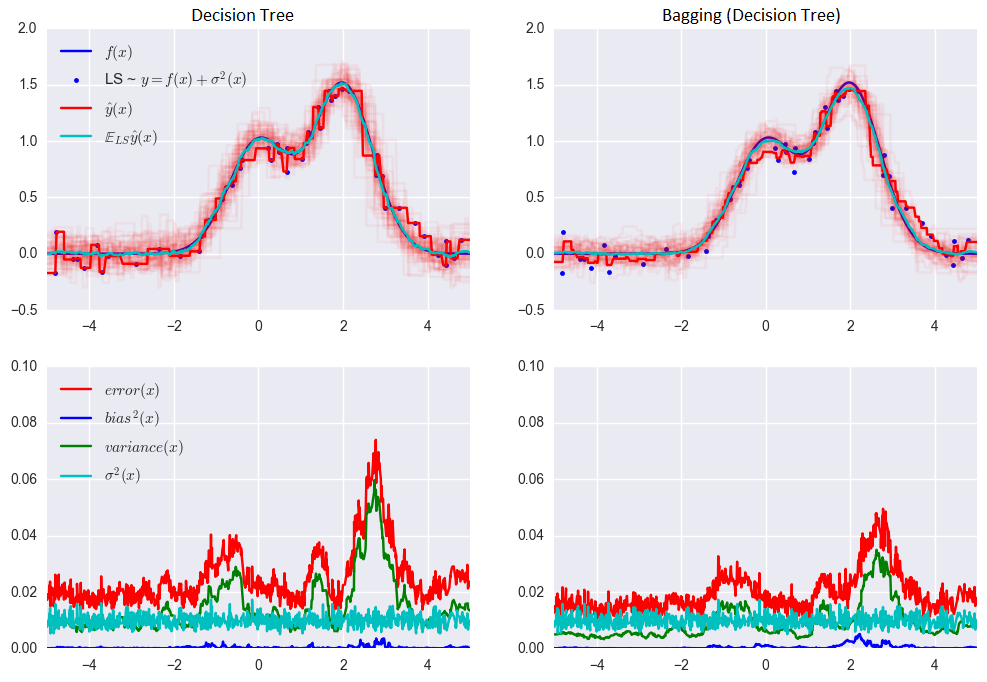 As you can see from the graph above, the variance in the error is much lower for bagging. Remember that we have already proved this theoretically.

Bagging is effective on small datasets. Dropping even a small part of training data leads to constructing substantially different base classifiers. If you have a large dataset, you would generate bootstrap samples of a much smaller size.

The example above is unlikely to be applicable to any real work. This is because we made a strong assumption that our individual errors are uncorrelated. More often than not, this is way too optimistic for real-world applications. When this assumption is false, the reduction in error will not be as significant. In the following lectures, we will discuss some more sophisticated ensemble methods, which enable more accurate predictions in real-world problems.

Looking ahead, in case of Random Forest, there is no need to use cross-validation or hold-out samples in order to get an unbiased error estimation. Why? Because, in ensemble techniques, the error estimation takes place internally.

Random trees are constructed using different bootstrap samples of the original dataset. Approximately 37% of inputs are left out of a particular bootstrap sample and are not used in the construction of the \(\large k\)-th tree. 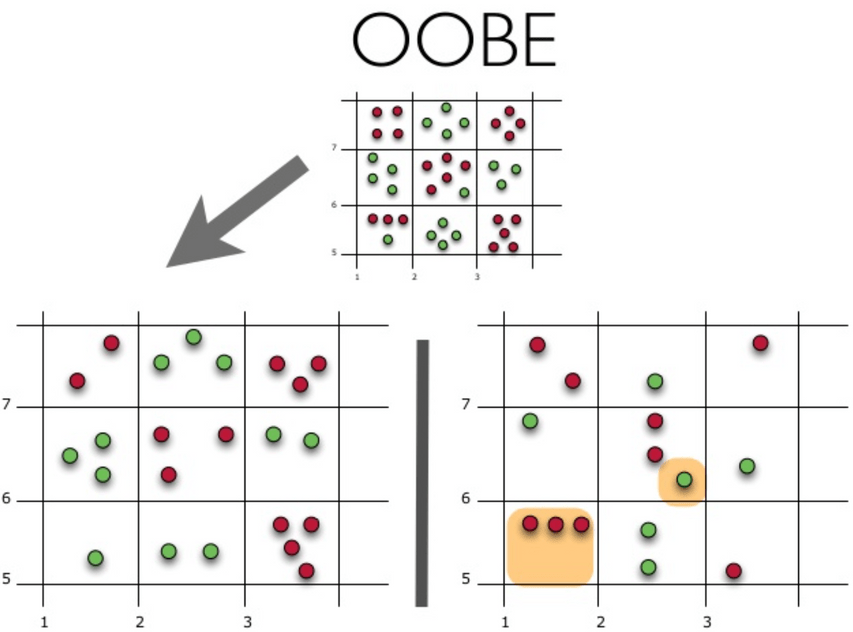 The top part of the figure above represents our original dataset. We split it into the training (left) and test (right) sets. In the left image, we draw a grid that perfectly divides our dataset according to classes. Now, we use the same grid to estimate the share of the correct answers on our test set. We can see that our classifier gave incorrect answers in those 4 cases that have not been used during training (on the left). Hence, the accuracy of our classifier is \(\large \frac{11}{15}*100\% = 73.33\%\).