Authors: Vitaliy Radchenko, and Yury Kashnitsky. Translated and edited by Christina Butsko, Egor Polusmak, Anastasia Manokhina, Anna Shirshova, and Yuanyuan Pao. This material is subject to the terms and conditions of the Creative Commons CC BY-NC-SA 4.0 license. Free use is permitted for any non-commercial purpose.

Leo Breiman managed to apply bootstrapping not only in statistics but also in machine learning. He, along with Adel Cutler, extended and improved the random forest algorithm proposed by Tin Kam Ho. They combined the construction of uncorrelated trees using CART, bagging, and the random subspace method.

Decision trees are a good choice for the base classifier in bagging because they are quite sophisticated and can achieve zero classification error on any sample. The random subspace method reduces the correlation between the trees and thus prevents overfitting. With bagging, the base algorithms are trained on different random subsets of the original feature set.

The following algorithm constructs an ensemble of models using the random subspace method:

The algorithm for constructing a random forest of \(\large N\) trees goes as follows:

We use the majority voting for classification and the mean for regression.

You can see random forest as bagging of decision trees with the modification of selecting a random subset of features at each split.

2. Comparison with Decision Trees and Bagging¶ As we can see from our graphs and the MSE values above, a random forest of 10 trees achieves a better result than a single decision tree and is comparable to bagging with 10 trees. The main difference between random forests and bagging is that, in a random forest, the best feature for a split is selected from a random subset of the available features while, in bagging, all features are considered for the next best split.

We can also look at the advantages of random forests and bagging in classification problems: The figures above show that the decision boundary of the decision tree is quite jagged and has a lot of acute angles that suggest overfitting and a weak ability to generalize. We would have trouble making reliable predictions on new test data. In contrast, the bagging algorithm has a rather smooth boundary and has no obvious signs of overfitting.

Now, let’s investigate some parameters which can help us increase the model accuracy.

The full list of random forest parameters for regression is shown below:

In case of classification, parameters are mostly the same. Only the following differ for RandomForestClassifier as compared to RandomForestRegressor:

Below are the parameters which we need to pay attention to when we are building a new model:

Practice with random forests in a real problem¶

In this example we will look at predicting customer churn. This is a classification problem, so we will use accuracy for model evaluation.

First, let’s build a simple classifier which we will use as a baseline. For the sake of simplicity, we will use only numeric features.

We have accuracy equal to 91.18%. Now, let’s try to improve this result, and take a look at the behavior of the learning curves when we change the basic parameters.

Let’s start with the number of trees: As you can see, when a certain number of trees is reached, our accuracy on the test set is very close to the asymptote. You can decide by yourself which value would be the optimal number of trees for your problem.

The figures also show that we achieved 100% accuracy on the training set, which tells us that we overfit. In order to avoid overfitting, we need to add regularization parameters to our model.

We will start with the maximum depth of trees max_depth and fix the number of trees at 100: Parameter max_depth copes well with the regularization of our model and it does not overfit as badly as before. The model accuracy has increased slightly.

Another important parameter worth tuning is min_samples_leaf. It also contributes to regularization. In this case, we do not see an improvement in accuracy on the validation set, but we significantly reduce the overfitting down to 2% while keeping the accuracy at about 92%.

Let’s consider the parameter max_features. For classification, the value \(\large \sqrt{d}\) (the total number of features) is typically used as the default choice. Let’s check whether it would be optimal to use 4 features in our case: In our case, the optimal number of features is equal to 10. This is the value at which the best result is achieved.

We have seen how the learning curves change with different values of the basic parameters. Now, let’s use GridSearch to find the optimal parameters for our example:

Let’s write the variance of a random forest as

In fact, this conditional correlation is not directly related to the averaging process, and the dependence of \(\large \rho(x)\) on \(\large x\) warns us of this difference. \(\large \rho(x)\) is the theoretical correlation between a pair of random trees estimated on the input \(\large x\). Its value comes from the repeated sampling of the training set from the population \(\large Z\) and the subsequent random choice of a pair of trees. In statistics jargon, this is the correlation caused by the sampling distribution of \(\large Z\) and \(\large \Theta\).

The conditional covariance of any pair of trees is equal to 0 because bootstrapping and feature selection are independent and identically distributed.

If we consider the variance of a single tree, it barely depends on the parameters of the splitting (\(\large m\)). But they are crucial for ensembles. The variance of a tree is much higher than the one of an ensemble. The book The Elements of Statistical Learning (Trevor Hastie, Robert Tibshirani and Jerome Friedman) has a great example that demonstrates this fact: 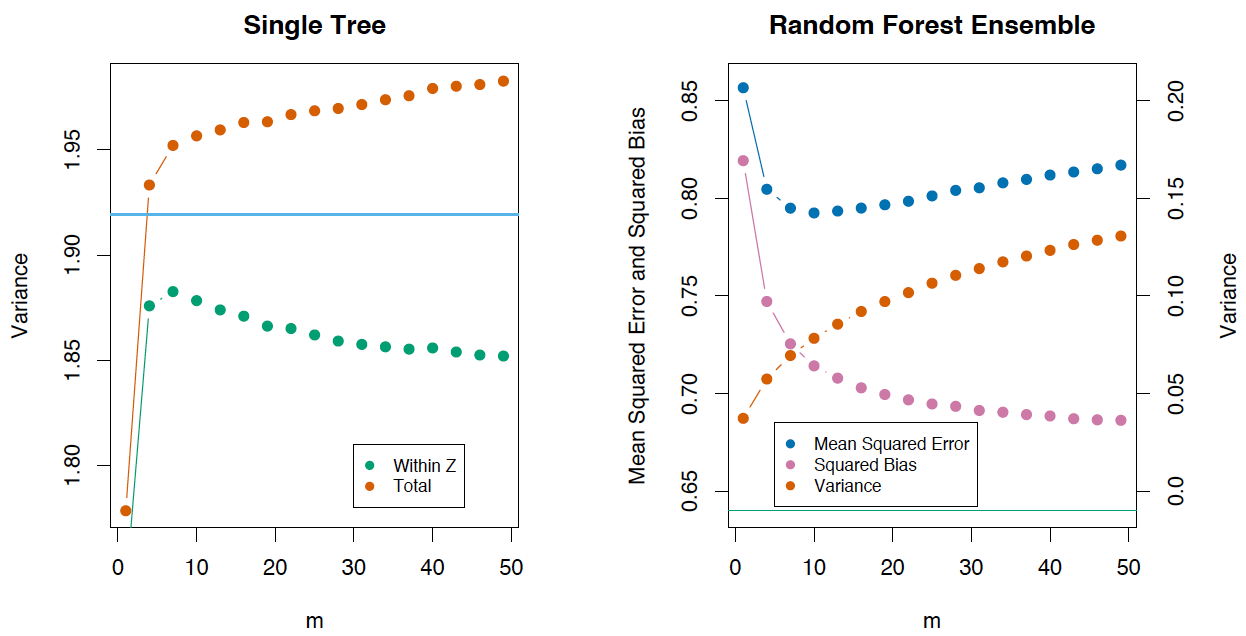 In absolute value, the bias is usually higher than that of an unprunned tree because randomization and sample space reduction impose their own restrictions on the model. Therefore, the improvements in prediction accuracy obtained by bagging and random forests are solely the result of variance reduction.

Extremely Randomized Trees employ a greater degree of randomization at the cut-point choice when splitting a tree node. As in random forests, a random subset of features is used. But, instead of the search for the optimal thresholds, their values are selected at random for each possible feature, and the best one among these randomly generated thresholds is used as the best rule to split the node. This usually trades off a slight reduction in the model variance with a small increase of the bias.

In the scikit-learn library, there are 2 implementations of Extremely Randomized Trees: ExtraTreesClassifier and ExtraTreesRegressor.

This method should be used if you have greatly overfit with random forests or gradient boosting.

The random forest method is similar to the nearest neighbors technique. Random forests predictions are based on labels of alike examples from the training set. The more often these examples appear in the same leaf of a tree, the higher their similarity. Let’s prove this formally.

Let’s consider a regression problem with the quadratic loss function. Let \(\large T_n(x)\) be the number of the leaf of the \(\large n\)-th tree in a random forest with input \(\large x\). The algorithm response for the input vector \(\large x\) equals the averaged response over all the examples of the training sample that fall into the leaf \(\large T_n(x)\). This can be written as

Then, the response of the composition is

You can see that the response of a random forest is a weighted sum of responses over all training examples.

It is also worth noting that the number of the leaf \( \large T_n(x)\), where the instance \(\large x\) ended up, is a valuable feature by itself. For example, the following approach works well: 1) A composition of a small number of trees is trained on a sample using a random forest or gradient boosting. 2) The categorical features \(\large T_1(x), \dots, T_n(x)\) are added to the sample.

These new features are the result of the non-linear space splitting, and they provide information about similarity between examples. In the book The Elements of Statistical Learning, there is a good illustrative example that demonstrates this similarity between random forests and the k-nearest neighbors technique: 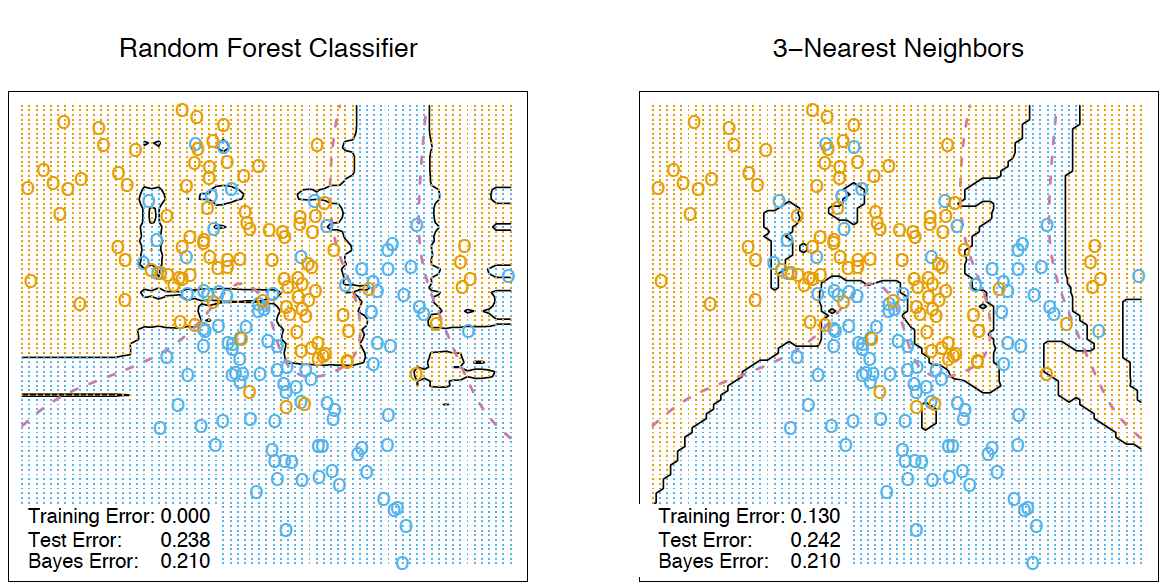 8. Transformation of a dataset into a high-dimensional representation¶

Random forests are mostly used in supervised learning, but there is a way to apply them in the unsupervised setting.

Using the scikit-learn method RandomTreesEmbedding, we can transform our dataset into a high-dimensional, sparse representation. We first build extremely randomized trees and then use the index of the leaf containing the example as a new feature.

For example, if the input appears in the first leaf, we assign \(1\) as the feature value; if not, we assign \(0\). This is a so-called binary coding. We can control the number of features and the sparseness of data by increasing or decreasing the number of trees and their depth. Because nearby data points are likely to fall into the same leaf, this transformation provides an implicit nonparametric estimate of their density.

9. Pros and cons of random forests¶